For someone who typically writes reams and reams of words as part and parcel of daily life - both when in paid employment as well as when not - it is ironic that 2018 has almost sapped all my energy where this blog is concerned.

There was a time not so long ago when verbal diarrhoea flowed on an almost hourly basis, punctured by sarcastic humour, a cynical take on life in general and the odd cartoon.

Now? Not so more.

I think it is fair to say that 2018 has been taxing, in more ways than one.

Certainly the world of work has shown itself to be decidedly ageist - not just with me but also with some other extremely talented colleagues. Lamenting this fact to an old friend in Italy, she was stunned.

"Here, you gain credibility only after the age of 50. Come back and be a consultant in this country!"

Strong friendships, many of them newer ones, have formed. They are good, solid and supportive. Certainly the emergence of such a divided nation has put into the spotlight beliefs of other, older, friendships that I had either not noticed, nor deemed important previously.

Time to ditch the negativity? Maybe.

Ageing parents and other health scares affecting close family and offspring have further enforced my (rather intolerant) stance that those who 'cry wolf' in an effort to seek attention, deserve even less than before.

Life is short. Life can be cruel. Life can be unfair. It's nothing new. Deal with it or stand up and make a difference.

May there be light at the end of this very dark and unpleasant tunnel.
May the unicorns fuck off over the horizon and take the likes of all Brexiteers with them.
May the light-hearted spirit of happiness, fun and laughter once more fill our days.

And may there be much more cycling. Of course. 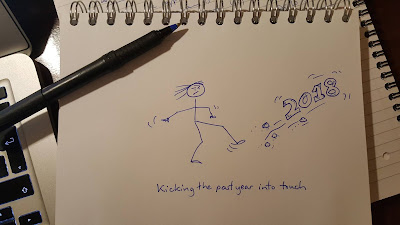