One of my favourite people on twitter put it perfectly today:

It is true.
I am exhausted by Brexit.
It has brought out the very worst in everything and everyone.

Those - like me - who clamour and campaign for Britain to remain in the EU, become obsessed with news stories and spin and propaganda and (hopefully not) false hope that it will, at some stage, just resolve itself, because those 'in charge' certainly are proving to be beyond incompetent.

I find myself wishing to wake up and discover it was all a bad dream.

The other side - and I have met and spoken with a few - who still hold on to (what they deem to be) perfectly rational arguments, and yet refuse to take off the rose-tinted glasses and spout the same propaganda nonsense that led them to vote leave in the first place.

No matter of facts, figures, statistics, reports, insight, knowledge, reading or discussion will persuade those convinced of their opinion to change it.

What happened to this country?
The joyous and incredible unison that everyone felt at the London 2012 Olympics?
Were there really so many unpleasant, deceitful, nasty and downright awful individuals already in our midst that we never noticed, and who have seized upon Brexit to cast off their masks?

And still no plan (was there ever?).

But hey, guess what now?
Apparently there is a Brexit dividend on its way.

It will come via the rectum of a unicorn who has supped on the leaves of the magic money tree.
And it will be embossed with the initials of the Maybot and served up at the table of Lord Hypocrisy of Rees-Mogg and his chums. With a dose of Banks and Oakeshott for good measure. Oiled by IDS and other inane wannabes past their sell-by date.

In the meantime, I'm off on my bike again. 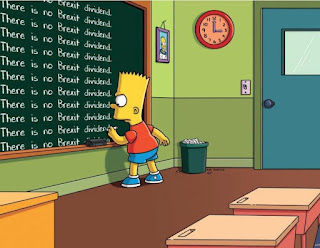