Did I miss something?

Another disheartening and mindless attack on innocents, this time in Barcelona, hatred without rhyme nor reason. Cowardice on a grand scale by those who were, like most of us, fortunate enough to live in a democratic country that grants freedom of expression and movement.

I just cannot comprehend, whatever the explanations offered.

The jumped-up thin-skinned orange misogynist still in charge over the pond, spouting incoherent tweets and unable to spell even the shortest of words. Twice.
How so, America? Oh, wait, yes, something cryptic about making a country great again and an election that went way off track.

At least late night hosts are not holding back. A degree of sanity - and comedy - there. Even if reality makes me weep into my breakfast porridge.

Politicians in Australia feigning ignorance about their own origins, with the 'purebred' deeming themselves the sole ones fit to serve in office. Because - heaven forbid - any of us should have mixed parentage. Oh, the sacrilege! Hello immigration? Any chance you let 'other nationalities' into the great nation down under since the convicts? Hmmm? Sure they weren't just opportunists?

Idiots still pondering how much longer they can get away with not having a plan for Brexit... or coming up with such ridiculous alternatives as to be truly laughable.

Oh, the irony of it all. My porridge at this stage resembles floating oats in a sea of tears.

Then we had the UK health secretary telling a world-renowned physicist that, basically, the latter didn't know his sh*t. Of course. Because once a d*ckhead, always a d*ckhead, isn't that so Jeremy?

He's probably not listening anyway. He never is.

But finally, FINALLY, we had something to really make us stand up and pay attention.

Indeed, the Maybot is back from her shirt-dress outfitted holiday. And the first thing on her agenda was....

Yes. We live in a society that deems clock stoppage the most pressing issue. No less than three (yes, three) parliamentary committees are "looking into the matter" from various angles.

I would hope that at least one of them will report that we live in 2017, most people wear a watch or have access to the time on their mobile devices, and that there are, quite frankly, more important items to deal with. 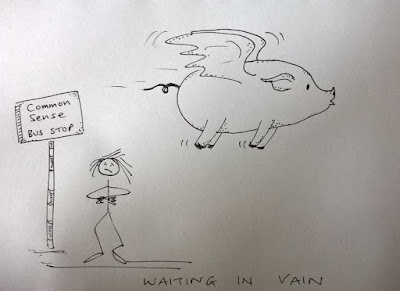