It is election season.

Obviously we didn't have quite enough excitement last year, so what we were categorically told would not happen in the UK is actually happening and it is only a matter of time before the proverbial starts hitting the fan once more, everyone goes for the jugular and we split the nation even further.

Just as well we are all "coming together", as Ms May would have us believe.

Except for Westminster, apparently.

Not sure where she gets her stats from, but I am guessing the same source as The Donald. Listen to those voices in your head and sooner or later you believe the alternative reality is the truth.

However my current favourite take on the dire situation - and delusion - of the incumbent PM (and her band of incompetents) is the most recent, involving her dinner with the President of the European Commission, Jean-Claude Juncker.

The report by Frankfurter Allgemeine Sonntagszeitung (FAZ) is solely in German, in hard copy print edition, with no English translation, and is summarised brilliantly by the Berlin bureau chief at The Economist via a series of tweets.

The event can best be described as a total clusterf*ck.

Oh to have been a fly on the wall. 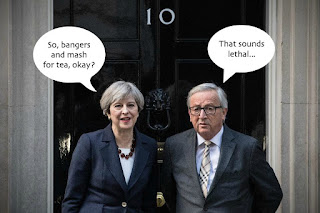