What a tumultuous week.

To take my mind off the crazy happenings over the pond, I went for a cycle ride today.

In the pouring rain.

Yes, I know - I was in good company at least.

And if you are going to lead by example when on two wheels, you abide by the rules. In this case #9.

There has been so much written since Wednesday's announcement about the most improbable candidate this side of Tutankhamen reaching the highest office of the largest economy in the world, that I am, quite frankly, all 'read out'. I have heard the views from either side, analysed the logic, searched the rationale and the psyche of the voting populace as to how such a result could occur (hello, Brexit anyone?), delved into the annals of history, swapped opinions with any number of individuals... and un-friended a few people on Facebook.

Life is short enough without having to put up with obnoxious and toxic views from the petty-minded. I have a choice too. It is called the < delete > button.

In my mind now I foresee The Donald acting out his celebrity status on a world stage. I can only imagine the type of conversations that will take place (although possibly not quite as funny as these ones).

The Donald: The wall. I want that wall built. By the Mexicans.
White House aide: Mr President, sir, I think you said you wanted Mexico to pay for it?
TD: Yeah, right. Pay for it. Find me someone to build it.
WHA: But sir, you can't...
TD: You're fired.

The Donald: I want all Muslims microchipped.
White House aide: Sir, I think you mean 'vetted'?
TD: Vet? Who? McCain?
WHA: No sir, the Muslims who...
TD: You're fired.

The Donald: The White House. Redecorate it.
White House aide: Sir, Mr President, can you be more specific please?
TD: Gold. Rename it. The Trump House.
WHA: I'm afraid you...
TD: You're fired.

If Britain was a joke on the world stage post-Brexit, then the US has gone one further (or more).

Reality TV has a lot to answer for. 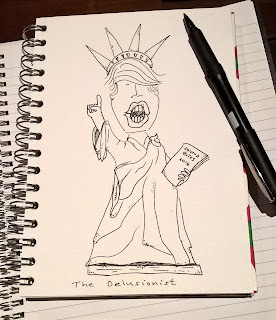