Just in case you had been living in a cave of late, there has been an historic event taking place here in Blighty. Let me enlighten you.

We have - sorry, had - a Prime Minister who won the last election with an outright majority. Unfortunately there was plenty of infighting and bickering amongst the ranks, so rather than act like the patriarchal figure he was elected to be, he appeased them with a sweetener.

"If we win, we shall hold a referendum about Britain being a member of the EU, okay?" he said, to much applause of those feeling aggrieved.

Now, had he been somewhat more aggressive like, I dunno, Maggie Thatcher, he might have actually said, "Sod off you lot, if you don't like the way I'm running the show, then the door's that way!" But he didn't. He let the toddlers have their tantrums and then rewarded them for chucking all their toys out of the pram.

Amazing. Even Adele has better crowd control. But then she can sing and engage with an audience, so I sort of rest my case.

Fast forward one year from the election and the referendum indeed takes place. Now this is where it gets confusing, so pay attention.

The PM is renown for constantly slagging off Europe. It is, apparently, the bane of his life and the reason for everything that is out of his control. Except tax havens. That's a whole other story. But he conveniently glosses over that.

However, as the factions line up on both sides of the 'leave' or 'remain' argument, the PM opts to prop up the latter. It turns out he does like Europe, after all! So do many others, from a variety of backgrounds - former arch enemies are suddenly best buddies, amazing!

The voting electorate is very confused.

Even more confusing is that the doomsayers heading up the campaign to 'get Britain back' consist of some of the most polarising individuals in current politics: a floppy haired former mayor of London, a prior Education Secretary who vilified virtually every educator in the country with his lofty agendas, and a self-confessed 'man of the people' who made his fortune as a commodities broker, headlined a racist propaganda campaign and failed not once, not twice, but seven times to be elected as an MP.

Quite a collection of misfits. Did I also mention that the first two were journalists-turned-politicians? No, thought not, but there you go.

So. Referendum day. The nation on tenterhooks. Twelve long weeks of ugly, nasty and thoroughly unpleasant campaigning over.

Guess what? Britain votes - albeit by a very small margin - to turn its back on the EU.

I won't go into the pros and cons and arguments, there has been plenty of writing about it and many, many incredibly eloquent pieces over the past forty-eight hours. Far more than I could ever piece together coherently in this blog post.

I will merely say two things to put matters into some perspective:

In the meantime, much sadness, shock and quite a degree of anger.

Once more unto the doctor

Hey ho, guess who's back? None other than the infamous Doctor LCM of the even more infamous BADASS* clinic. 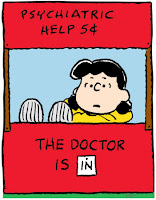 After more than a year's sabbatical, the piles of pleading letters could no longer be ignored. It was time to deal with the clamouring requests and select a choice patient whose dilemma needed attention tout suite.

The lucky individual to benefit from the Doctor's words of wisdom in this edition is desperate. And when we say desperate, we mean just that, in every sense of the word.

So without further ado, let's get going.

For many days weeks months now I have been trying to find meaning in my life. I get up, have breakfast, shower, dress, sit at my desk, look at my computer and... wait.

No matter how hard I stare at the screen, or how many fingers I cross, or how many lucky omens I seek out, nothing is forthcoming. It would seem that the world turns and I am at a standstill.
All the 'How To' manuals, the TV programmes, the self-help courses and so forth have come to nothing. So many promises of what or where I should be at this point of my life have failed categorically to eventuate.

Surely I am due a revelation of some sort to guide me on a path of enlightenment?

Please help. I am very disheartened and confused.

Unless you have been living in a cave of late, there is a referendum in little over a couple of weeks' time which will determine whether the UK stays in Europe or not. As I see it, you have a few options to find, as you so aptly put it, 'meaning in your life':


I also hear the clergy are recruiting as current numbers are low. Am sure they would welcome you with open arms. Possibly more given recent trends. Plenty of 'meaning' there, my dear fellow.

The choice, as they say, is yours.


If you too have a pressing business or personal matter that you would like answered or on which to receive similar valuable advice, please submit to the Doctor and wait patiently in line.