Ever heard the saying, "Don't enter a battle of wits with an unarmed person"?

I feel of late as if I have been un-wittingly drawn into such (see what I did there? genius) by way of my involvement with certain aspects of my life to which I devote - much to OH's annoyance - a substantial amount of time, none of it fee-generating, but very engaging and interesting and personally rewarding.

Well, I say 'personally rewarding' but in truth the fine line between that and wanting to head-butt a few people for the sake of knocking some common sense into them is rapidly diminishing.

So, a question to all of you: why do trivial matters evolve into substantial issues and how do you avoid the avalanche of time-wasting that accompanies the mêlée?

Do you:
a) attempt to put out any fire as soon as it appears by stamping on it
b) pull out a hosepipe, turn it on full blast, and aim at anything that moves
c) don a wetsuit, head for the nearest lake and bob about until the fracas has passed
d) call emergency services and try to explain whilst exonerating yourself from any culpability
e) focus on more important and pressing matters to hand

Me? I draw a cartoon.

Because that's what sensible people do in times of idiocy. 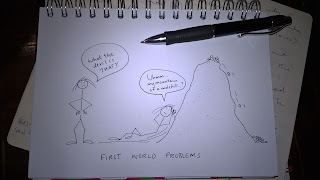