This week I had two samples of the latter in the space of a mere morning.

Let me enlighten you.

Picture the first scene: an individual - let's call him Bruce - learns about my line of business and utters those infamous three words, "We should talk."

Out of courtesy I agree, he lives nearby after all, there is some vague common ground (very vague, to be honest) and we settle on a time and place near home.
He later asks if we can move to an even closer venue as he "is expecting a delivery".
Fine, not a problem.

Come the day, I turn up, wait some twenty minutes, send him a text ("I am here", no reply) and then head home as I have work to do. I figure he has been delayed and at worst our paths will cross as there is only one way to approach the venue from our respective residences.

Forty-five minutes later I get an email - via LinkedIn, of course.

It says, "Call me" and his number.

Excuse me? You requested this meeting, you have my contact details, yet I am to call you?

Another message follows. "Not sure why you arrived so early?"

Turns out I had it wrong in my diary. By half an hour. Mea culpa.
Before I can answer, he sends me another LinkedIn note with a cut and paste of our original email exchange - stating time and place - with a note: "Please see your message. And my reply."

Well, Bruce, let me educate you a moment here.
When it comes to looking for new business, telling prospective clients about the error of their ways, demanding that they call you, and then castigating them for being early hardly bodes well for the future, does it? Or do you find that being bolshy from the start is a good omen? Unfortunately it has shown me a side of your character that I had already glimpsed at, and do you know what?

Yup. < delete >. You are banished in all forms.

Now picture the second scene, a mere couple of hours later: I need to unlock a PIN for a card reader that enables online access to an account.

The online 'chat' assistance is useless (I will refrain from elaborating, suffice to say it took the best part of five months to get one card and one PIN to work when the original bank was taken over, most frequent citation from the phone help desk for their incompetence being "Our computer system is down/being upgraded/gone fishing") but amongst all the bits of documentation I find a guide saying that if I merely go to one of the bank's ATMs and follow the instructions, I can unlock it myself.

So I make my way to the nearest ATM for this bank, and yes, you guessed it, it was out of order.

Aha, I think. I'll go inside and see if they can deal with this over-the-counter.

There are two people serving. One seems to be faffing around while the other is working at a pace that would do a snail justice. There are three of us in the queue.

Eventually the lady in front of me is served. I use the term loosely as the bank staff person seems incapable of doing a simple transfer for her without additional assistance. Since her co-worker is still faffing, the lady is told she "has to wait" (no niceties, mind you) and to step aside - which she does, although understandably disgruntled - and it's my turn. There are now five people in the queue.

I step up, explain my dilemma and await for assistance.

I get a blank stare as if I had just stated that the Martians have landed outside and we are all being abducted.

A male co-worker steps in behind snail-pace woman and opens his mouth.
"What?" is all he can muster.

I step back slightly in awe at his manners, and re-explain. This is getting borderline tiresome.
"Use another ATM," he barks at me.
I tell him that the instructions are to use a bank-specific one for this particular issue.
"Nah. Use any one." And he retreats to his desk.

I am left standing by the counter, snail woman saying, "Next!" and wondering whether I have missed something.

I haven't. There are now eight people in the queue, including aforementioned lady who-could-not-be-served-either.

"Excuse me," I say, very LOUDLY, so everyone - including obnoxious male staff member - can hear me.

"Your customer service is disgraceful. You have not only been totally unhelpful, you have also been very rude to me and the lady beforehand (she nods vigorously and replies, also loudly, "Yes, very much so!" Everyone else in the queue is paying attention now). No 'please', no 'thank you', no 'madam', no helpful assistance, no common decency or manners. Have you ever heard of client care and satisfaction?"

Surly male staff member looks up. "Yeah, whatever," he replies, and goes back to flipping pieces of paper about his desk. Snail pace counter woman just stares at me - indeed the Martians could land and would probably refuse to take her at this rate - and faffing counter woman continues to faff. She is still dealing with the same client who is now on his third phone conversation with his long-lost cousin in Brazil. 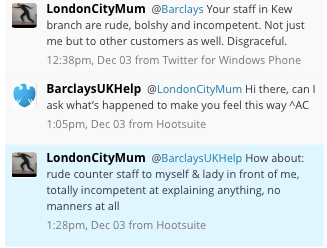 I'm sure they are. I should have added that I know of a fellow called Bruce who would also benefit from the same training. They could split the cost.