How not to interview - part II

Some of you may remember this episode earlier in the year.

Guess what? It almost happened again.

When I say 'almost', I actually mean that the so-called 'headhunter' failed to learn any lessons first time round and had the audacity to call me again.
Here's what transpired. I posted on my FB page for the amusement of friends, but then thought, "F*ck it, let's entertain the masses!"

So here you go. A worthy cut and paste this time round.
The comments have been even more amusing.
Laugh along now...

"This is Rob. I'm a headhunter. I wanted to know what your current status was and whether you would be interested in [insert lowly position here]?"

"Why don't you tell me a bit more about yourself, Rob, and where you are calling from?"

Aha. I gotcha. You're that sad f*cker that set me up on the memorable 'interview' with the company that was 'desperate-to-meet-you-how-soon-can-you-see-them' that turned out to be a whole load of shite. The very same 'headhunter' who had not only not done his homework then (and got a mouthful from me post meeting with the 'desperate' client) but has also failed to learn any lessons since. Including the "Do not ever call me again" one.
Because, Rob, if you READ my LinkedIn profile (which you do, I can see that much) you would see what I am up to and maybe, just maybe, alter your pitch ever-so-slightly? Yes?

"So do you have anyone you could recommend, any names for me?"


How many more months do you reckon before he tries again?
I'll give him marks for persistence at least. 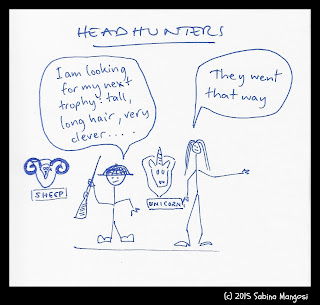 Kevin and the animals

We rendez-voused this time chez the Wine Writer's abode in leafy Oxfordshire, a beautiful Sunday's outing to the countryside, complete with dogs, chickens, goats, sheep... and children.

There were only six Kevinettes.

This had not been the original plan.

Undeterred, we offloaded the minors on to WW's husband, the Resourceful Dentist, who nonchalantly proceeded to throw another batch of sausages under the grill to feed them all before taking them off on a very long walk with the dogs in tow.

Excellent stuff. We could proceed with what we do best: eating, drinking, and talking shop. And books, of course.

When it came to pudding there was a slight mishap, a Goldilocks moment.
Someone had got there before us!

Belfast Blonde thought it was merely an innovative designer cake tin at fault.
The Doctor of Psychology presumed otherwise.
Our Botanical Artist declared it "an interesting illustration" of a pear tart.
Tough Mudda declared she was too full to eat any more, thus immediately arousing suspicions.
LCM laughed - mainly because she, too, was overfed by this point and could hardly speak, let alone comment.

Our gracious host conceded that no, 'twas none of the above.
One of the dogs had decided to sample the baked wares... and the damage had been "cut off".

Cut off the cake, that is, not the dog.

Either way, it was delicious.

Three days on and we are all still fasting.

Who needs a diet when you have Kevin for company? Even the chooks were amused, as the Botanical Artist's 'Inktober' sketch illustrates.


Cooking, drawing, reading, eating, drinking. We're a talented bunch.
Even if we do divert somewhat from being a 'typical' book club.

Aside from new work ventures, partnerships, public speaking events, mentoring programmes, everything kicking off again now the school year has started, rugby training and festivals and refereeing underway, and trying to keep track of the offspring and OH's whereabouts, well nothing much.

Unless you count the Rugby World Cup, which, bar playing on loyalties in this Australian/Italian/Welsh household - with strong Kiwi/Irish/Scottish/English heritage to boot - has seen the LCM troops screaming the neighbourhood down (last Saturday) and ensuring that everyone joins in the national anthems.

Especially this one, which, regardless of which country you hail from, is certainly the most beautiful and by far the most moving, ever:


Blame OH. It's all his fault, of course (he's the Welsh contingent, in case it still had not dawned on you).

Right. Back to work now until the next kick-off.
As you were.