Ohmygawd what? Another month end? What the actual flippety flip? (I am forsaking swearing because my mother is likely to read this)
How the devil did that happen?

Yes, tomorrow is the FIRST of JULY people.

Here is a summary of the news headlines, before they actually hit the airwaves in the morning.

BONG (that's Big Ben chiming, in case you had no idea what I am on about)

Greece has left the EU and is now part of China. They have adopted the renminbi as their new national currency and lessons in Cantonese and Mandarin will be introduced as a compulsory part of the national curriculum from September. Which is a good thing as there was no national curriculum to speak of beforehand unless you count gesticulating and being loud - a trait also common in other countries such as Italy, Spain, Portugal...

Kanye West has changed his name. He will henceforth be known as Dick. He has demanded that all those who hail him must bow and scrape before his magnificent being and address him only as 'Holy Dick'. Those who fail to categorically follow this mandate will be castigated and forced to wear labels around their necks for the duration of one month that read: There is only one Dick and I am not Him.

Heatwave enters day two in Britain. With the thermometers rising steadily for the first time since 2014, the great pale public expressed surprise that this should occur in their fair isle rather than on shores further afield. Members of the populace were caught unaware by the calendar that read JULY, and complained repeatedly about the inconvenience of having to deal with warmth, sunshine, flimsy clothing and lightweight shoes. The Met Office duly complied and changed its forecast to promise thunderstorms, downpours and generally dismal conditions for the remainder of the summer months.

A new book takes the business world by storm. After a fraught two-year wait, the much-anticipated tome of wisdom is finally revealed to ecstatic audiences: LCM's audacious, amusing and utterly amazing new book 'How to stack a dishwasher' was released to rave reviews and is steadily climbing up the bestseller list.
"A 'must read'!" enthused the FT.
"Don't know how I managed without it!" exulted The Economist.
"A revelation of real life in a working woman's world!" wrote Harvard Business Review.
"Where's my free copy?" asked most of the blogging community.

As you were then. That's enough excitement for one evening. 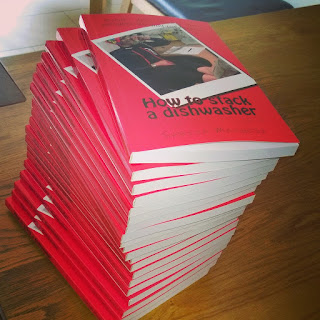