The right to the right of freedom of speech

I read one of the most articulate articles this week about the post-Charlie Hebdo fall-out.

Suzanne Moore puts it so succinctly when she states:
"Critique is not blasphemy. Texts can be reinterpreted. Tolerance has to be reciprocal or it is not tolerance at all. We should at least be honest now. Those who don't believe in any god have as many rights as those who do."

Hear hear, I say. Enough of the hypocrisy and concern about individuals being offended if what you state - intentionally or not - is unpalatable to them.

I have been scolded in past years about my cynical posts depicting unsuspecting members of the general public and poking fun - with sarcastic commentary - about their attire.
"Someone might take offence," I was told (by a Facebook 'friend' no less, who has since been purged from my circle for double standards), as if I were a naughty child who had scribbled rude words on the classroom wall. I cannot believe I subsequently added a disclaimer to appease this individual (it's still there, see for yourself).

An aeon ago when this blog first started, I had a Paranoid Former Employer who took offence at anything and everything ever posted, claiming (indirectly, never to my face, out of fear of upsetting me no doubt) it must be about them, and threatening libel, slander and the proverbial kitchen sink. Anonymity did not cut it (nor did the fact that the posts were entertaining) but the PFE was seriously unpleasant. Interesting how they are now under investigation by the SFO for fraud.

I can think of at least half a dozen cases recently where I have been chastised (nicely, of course, because no one wants to offend me either) about proposed measures or discussions that need to take place within my own working and community environment. I put appropriately worded texts together, send them to a reviewing party and get replies that inevitably make me bang my head on the table.

Why? That old chestnut again. The need to "tread carefully". Not wanting to "upset anybody". Needing to "keep the calm". In effect the unwillingness to call a spade a spade, or even a fucking shovel despite the situation demanding it.

It's okay. I get it. I understand, I can see beyond my own limited power of observation the need to take other people's concerns into account. It drives me insane and I could waste endless hours thinking about it. I don't. I have far more pressing matters to deal with.

But now the Pope - the Pope, for crying out loud - wades into the debate with his stance on the matter, stating that, "One cannot provoke; one cannot insult other people's faith; one cannot make fun of faith."

Wrong. You can. You can make the choice not to, and you can err on the side of politeness and what is deemed to be 'good manners', but you can. And in secular societies you certainly should be able to voice an opinion without being gunned down.

As another commentator * has stated, "... it is not normal to punch someone who insults you [...] Verbal provocation is never an excuse for violence - that's the wife-beater's defence."

So, what's the point? The point is - or mine at least, for fear of 'offending' anyone, heaven forbid - that the 'right to freedom of speech' is one that we are all entitled to.

However the right to tell anyone, ANYONE, what you can or cannot say is something no one has in today's day and age. What you hear or read may be unpalatable to you. It may offend you. It may amuse you. It may go against everything you hold dear.

But. It does not give you the right to tell the person perpetrating that view that they have no right to do so.

Deal with it. Or answer with sarcasm. It's a wonderful tool.
And it's free. 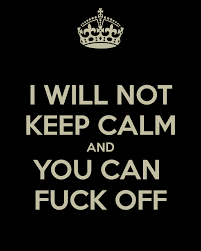 * just in case you think I have a bias for a particular newspaper, given the articles quoted in this post, worry not, I read widely. I wouldn't want to offend anyone.