At least when you row in a boat with other crew members, you all cross the finish line at the same time.

Two other Kevinettes (from my rowing past) were in the posse: the Aussie Solicitor and the Wine Writer.
Phenomenal rowers, awesome cyclists.
I should have known how things would pan out after watching them become mere dots on the horizon after two hundred metres.

There was also something of a hill (to climb) between us by then. 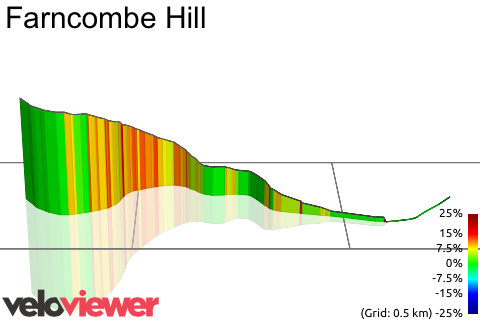 So, with the three-woman pace line having fallen at the first hurdle hill, I was back to being Nobby No-Mates on my own two wheels. Madame Escargot at her finest. Although I was overtaking quite a few people, much to my own amazement (don't think they were trying hard enough really, I truly am not very fast).

And then my rear tyre decided to call it quits and with an audible "Pfffffsssss..." went flat on me around the half way mark.

Do not fear! LCM knows how to change a puncture! It will only take her fifteen twenty thirty-five minutes much longer than necessary! And the inner tube will refuse to sit flush inside the rim! Despite any attempts to fiddle or push or manipulate or start all over again!

Cue frustration, pedalling slowly with bastard uncooperative wheel to nearest marshall (a mere two hundred metres away, if only I had know earlier, grrrrr) and requesting mechanical assistance.

Eventually the van and man with all the gadgets turned up and faster than you could say "Victoria Pendleton" had me sorted and back on the road.

By this stage I can add that the Aussie Solicitor and the Wine Writer had already consumed a full Sunday lunch, downed a couple of pints, and read all the weekend newspapers twice over. They were about to indulge in a spot of afternoon tea when I finally turned up.

You can probably see my point about the rowing boat now.

Oh, I also recall at some stage going through a village called - appropriately - Hurtmore.
No shit, Sherlock.

But, jokes aside, it was also great fun and a fantastic day out.

Just next time I will have teflon tyres.
Or alternatively my own personal support car and mechanic.