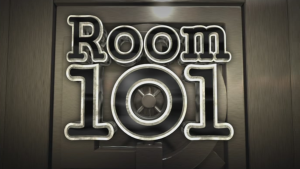 Last Wednesday evening I ran in to a great friend of mine at the rugby club. The kids have been partaking in an excellent summer evening training event over seven weeks that focuses - for one hour each time - on fitness conditioning and nutrition. A great preamble to the 2013/14 season that gets underway in a fortnight's time.
More importantly, it is being run by three of the 1st XV players who also double as coaches.
Even more reason for mothers responsible parents to accompany their kids and ogle the talent watch the drills.

My lovely friend (a very, very, very clever and talented Professor of Archeology no less) approached with what looked like a thundercloud over her head. The conversation went something like this:

Which got me thinking. Aside from play dates, what else would I send to Room 101?

How's this for starters;


What are your candidates?


* 'Room 101' is a BBC comedy television series based on the radio series of the same name, in which celebrities are invited the discuss their pet hates and persuade the host to consign them to a fate worse than death in Room 101, named after the torture room in the novel 'Nineteen Eighty-Four', which is itself named after a meeting room in Broadcasting House where Orwell would sit through tedious meetings.
(with thanks to Wikipedia)