In French that would be, "Excusez-moi, vous disiez quoi...?"
And no, I did not use Google translate (except for the spelling), because I have been speaking French almost non-stop for a week. I feel very proud of myself, especially because I was able to laugh along with anecdotes and even try a few jokes of my own. Although they might have been laughing at me, not with me, come to think of it. Never mind.

Anyway, it was one lovely week away when the rest of the country was going through its annual apocalyptic food frenzy and frantic gift wrapping session that is otherwise known as 'the festive period'. Mayhem. Carnage. And a lot of sore heads and bursting waistlines.

Yes, escape beckoned. And a bloody good one it was too, highly recommended. Change of scenery, some sunshine (remember that?) and even a touch of warm weather (also an unknown quantity in Blighty since, oh, about 2003?). They even did the whole celebration thing for the benefit of the children and quite a few of the adults as well, so noone could claim they were missing out.

Bon, alors. So whilst all this (tout ça) was going on, I got distracted by quelques petites choses (a few things)... as you do.


I was also très amusé by les traductions. Especially those relating to la fée du linge duties (that's the Laundry Fairy to you lot).


And it should actually say 'insert the token with vigour and donner à la machine un bon coup de pied'.
Because otherwise your seven year-old will just look at you dolefully and rouleur les yeux and say "Mon Dieu maman! C'est le meilleur que tu peux faire?" (loosely translated as "Is that your lot?")

Finally, this little gem. Because, quite frankly, the English version sounds like something akin to le panda bear who infamously 'Eats, shoots and leaves'. Or should that be 'Mange, chasse et quitte'? 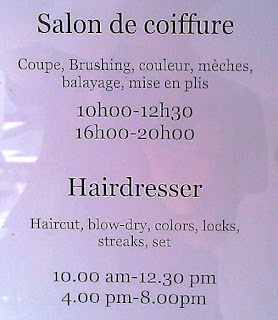