A summary of events

'Tis the season and all that malarky. Yah boo, bah humbug.
To those of you who know me well enough by now, my aversion to the Christmas cheer is nothing new.
To those who don't - and I'm looking at YOU Mrs and Mr PR Person - well, time for my own version of festive fun.

I like to think of it as an alternative to the dreaded year-end circular letter (which I have covered before), a succinct summary of anecdotes collated throughout the year, a LCM tongue-in-cheek top three (by sector) of what has amused me during 2012.

Anyone else have some other gems they would like to add?

Conversations with my training partners - the latest episode

Just because I have not posted for some time about those ever-so-slightly mental training partners of mine, does not mean they have fallen off the radar.

Oh no. Not bloody likely.

They are still around, still wreaking havoc, still trying to enrol me in triathlons I would rather avoid (because I want to try something different, not because I am slacking *cough*), still giving me grief about anything and everything, including training sessions (lamentable - mine, not theirs), levels of fitness (ditto), new kit (I have some, it is making not one jot of difference, see previous points) and running in the pre-dawn dark using a torch (so I can see where I am going, not so I can act as a guiding light for the airplanes flying overhead... although I do wonder sometimes).

Wine Writer - Hello there training partners. Just wondering if either of you would like my place in the Henley swim on 30th June 2013? This is the one that was deferred this year due to rough conditions, remember? I may be in Alaska at that time next year... It's very quiet from both of you. Hope you are okay, not training too hard and that I am not in the dog house for some reason?

LCM - Hmmm. Will pass on the swim. Just watching weather forecast now is putting me off open water swimming for good! All well, training gone totally up the Swanee (Aussie term, aka haywire), but Brazilian Babe has a new best friend, goes by the name of Elliot. Tsk. Will let her tell you all about it. Apparently my invitations to come for 6am runs are no longer good enough for her and she needs a twenty-something Personal Trainer who chastises her about eating bananas and disapproves of running because "what has it done for you?" (aside from getting fresh air and keeping me company, I suppose).
See you at the rowing club dinner? I will stab myself with a blunt pencil if I am seated next to Boring Coach and dreadful wife again. Or I will just hog the bar and refuse to be seated!

WW - Don't blame you for passing on the swim - you should see the river [in Henley] right now! Not sure what madness possessed me to think of getting in it, ever. I think partaking of Elliot the Personal Trainer is definitely not playing ball. For those of us who do eat bananas I think it is even cheating. Or am I jealous - my self-motivation is definitely on the dwindling side...
Yep, we're up for the Christmas rowing club bash and really looking forward to it! Will join you in the bar.

BB - LCM, you are really terrible. WW, do not listen to anything she says. It is all utter rubbish.
No, you are not in the dog house, but might be sent there if you keep rubbing in the Alaska thing. It would be nice to catch up for something that does not involve any more effort than raising a glass, though if you insist enough I might be game for a ride in the park, or two, or three... I am afraid I can't get excited about this swim on my own next year... (the truth is that I don't think Elliot would approve it. And now that I think of it, neither the rides in the park).
I'll see you at the rowing club then. I actually think you are being super unfair with Boring Coach, LCM. And his wife is really lovely.

LCM - Excellent, I will ensure you meet them both and spend an entire evening in their company. WW and I will just hog the bar and toast your - and Elliot's - good health.

BB - Elliot and I, and I am sure Boring Coach and other half, are totally against toasts anyway. Pure carb.

WW - Toasts, specifically the alcoholic ones, are the stuff of life and not to be rejected under any circumstances, especially in our disgusting British climate right now. I hereby disapprove of Elliot completely and utterly, but am overjoyed that you'll be coming to the rowing club ball, BB, and intend to persuade you to eat lots of bad stuff and drink beer. Because that's what rowers do.

LCM - Hmmm crossed wires here. She is not coming to the rowing club ball. Unless, of course, Boring Coach invited her.

And later by text exchange.

LCM - Dare I even ask if you want to come running tomorrow morning, sprints included, or do you need to check with Elliot first? No bananas, promise.

BB vetoes. Something about running (a business workshop) and early starts. Pah.

And there you have it. We bumble along. At least WW will keep me company at the bar of the rowing club ball whilst I drown my sorrows about being upstaged by a very fit and motivated twenty-something upstart who has robbed me of one of my training partners for the winter months.

This too shall pass. I will just keep on telling BB how she is old enough to be his mother. And me even more so. That should do the trick, eventually. 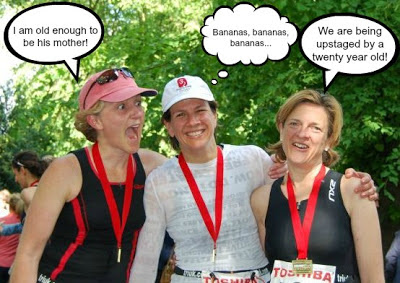