The omen was not good when 8am came and went and our coach did not appear. The same at 8.15am. And then 8.30am.
Amidst much frantic phone calling to contact numbers (that did not answer or simply dropped out), and pondering as to whether we could find space for our entourage on the other two luxury double-decker coaches that the U8s and U9s had secured (obviously far better contacts than yours truly), there was a sudden howl of laughter disbelief when a vehicle reminiscent of the 1970s chugged in to view.

Yup. Our bus. Mocked by one of the other (U8) coaches as having last made an appearance in the 1972 film 'On the Buses' (with Reg Varney), we smiled through gritted teeth and climbed in. No DVD player, slightly wonky heating (or distinct lack of control of it), but at least there were seats, it was clean, and there was an on board loo. More about that later.

Possibly the fact that I had threatened latecomers with roller-skates and having to hold on to the rear fender all the way to Wales meant that at least our departure was swift, what with everyone being there on time. Not sure the other teams could make the same claim. Apparently they had to make at least half a dozen roll-calls to check numbers. We nailed it first time.

Furthermore, the knowledge that our group was also staying in a proper hotel overnight (with comfortable beds, hot showers and running water, and all-inclusive breakfast) and not a hostel (dormitories, lumpy mattresses, shared facilities) probably explains how other touring groups (ie the U8s) saw fit to apportion their respective budgets.

Given the lack of a DVD player on our 'On the Buses' coach and the paltry supply of other techie gadgets to keep the children entertained (one iPad between 22 children makes a) the owner very popular, and b) the parent very diplomatic), we embarked on a far more serious mission: teaching everyone the Welsh national anthem. In Welsh. Our lead coach was choirmaster. And a bloody good one at that too (it helps that he can sing in tune).

Now, for those who already struggle with languages, this can be a challenge.
For those who find twenty-seven consonants in a single word (with five l's, eight w's, and fifteen g's in quick succession) even more daunting, well... let's just say I had a stroke of genius and foresight and printed off a phonetic version for all to follow.

When even this was criticised for still being incomprehensible, I pointed out that I had taken it from that venerable institution that is the BBC. As we had a rather senior member of this same institution on board in the touring party, any criticism soon turned to praise and hey presto - everyone joined in.

And so to the rugby.

The kids were brilliant. Despite the inclement weather (rain, wind, glimpse of sun, more rain, still more rain, wind... you get the picture) they played their hearts out and showed everyone how far they have come in a single season.
Less 'bees about the honey pot' chasing a ball round a pitch - or rather, the child in possession of the ball - and more focus on line-outs, tagging, passing on the run, going forward, scoring tries, and, most important, teamwork. I felt like a proud mother with her brood of chicks. And that was not counting my own cherubs who were playing across three age groups.

Our Welsh hosts on both days were gracious and welcoming. We aimed to impress Pentyrch on the Saturday by practising 'Hen Wlad Fy Nhadau' in their presence, and then they sang it with us. We sounded much better during the latter rendition.

Llanishen on the Sunday was not party to our vastly improved choral renditions, but I put this down to the rugby scrum that was taking place in their club house post matches - part mass touring entourage (on top of the visiting U7s, U8s and U9s, the U12s then also showed up), part weary (and damp) parents enjoying a well-deserved beer or several without the onus of having to drive back to London.

And so the tour returned home. The benefits of a 'lesser' quality coach did not diminish our squad's spirits in the slightest. Aside from one child managing to lock themselves in the loo on the outbound journey (my daughter, no less), our very own Reg Varney (aka John the bus driver, catch phrase: "She must be right, musn't she?" when referring to Doris the sat-nav lady) was a master of maneouverability in the Welsh country lanes - unlike the flash double-decker luxury coaches with restricted turning circles and visibility - and all touring parties arrived back at the club house within minutes of each other.

Suffice to say, in conclusion, that our t-shirts were spot on. 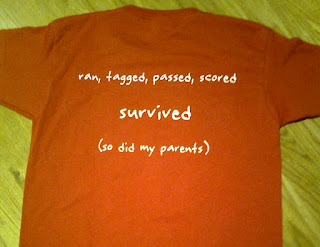 Here's to next year!