Rogue trading - the view from the inside

It was all going so well. The sun was shining, the gods were smiling, the upper echelons of power didn't have a clue and I was playing (yes, playing!) with other people's money.
Bliss, I tell you, absolute bliss. Not even Swiss efficiency could touch me. I was king of the world, dabbling in markets that meant nothing to mere mortals, racking up trades that would baffle the common man on the street, hedging positions that covered my arse and guaranteed my multi-digit bonus.
"Wasssssup?!?" was the catchphrase we used to greet our peers in the morning, bright-eyed and bushy-tailed at 6.30am, ready to take on the world.
"Grützi mittenand!" was the reply from our boss, Herr Stickler. A right one, he was. William Tell of the modern era. Nothing got past his beady eye. Heard a snippet about shorting the Euro? He was on to it like a rat up a drainpipe. Got a tip off regarding safe haven investments? His slippery fingers were all over the phone dials placing positions. Overheard a discussion on an innovative hedging strategy? He was on to it before you could say, "Two billion dollars."
Amazing, a true talent. Like the rest of us. Young (ish, Herr Stickler is pushing thirty after all), ambitious, hungry (and not just for food), over paid and over here. Nothing stood in our way.

There was just that very irritating institution called the Swiss National Bank and their insistence on interfering in the market when, really, they should have known better. I mean, the motto "Who dares, wins" was not intended for a national institution trying to protect their currency from positions of unbearable strength.
It was meant for us masters of the universe who were able to defy common sense, throw caution to the wind and gamble away the company's nest egg under the pretext of making eye-watering profits. Sanctioned all the way to the top we were, I'm telling you. Of course, they conveniently deny everything now, claim they had no idea. Pure as the driven snow.

Oh well. Never mind. As Herr Stickler said to me the other day when we exchanged words in the police cell, "At least it wasn't our own money." 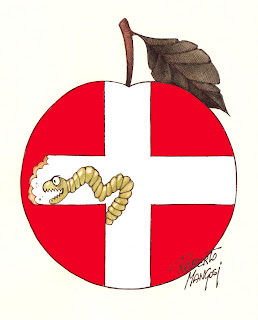