Once upon a time there were four friends who regularly went on wind surfing holidays together: LCM, OH, Lady and Dr P. A few years down the line, there were suddenly ten of them, of which six were small people. They still went on holiday together, but had to go everywhere twice.
The second time to apologise.
As windsurfing was slowly but surely overtaken by kite surfing in popularity, the four friends steadfastly stuck by the original sport. The kit remained as cumbersome as ever, the sails varied in size according to wind strength, and the boards became more fancy year in, year out. The most popular ones were called ‘Screamer’.
LCM duly did and bailed out. She decided kite surfing was the way to go, but her back had other ideas and reminded her that she should act her age, not her shoe size (which was already substantial anyway at a tidy 41). So she ogled the young fit things instead and their flying machines.
It was hard work.
The friends had hired two cars between them. LCM’s car came minus a rear windscreen wiper, with dials that were in the most peculiar places, scratches all round the paintwork and safety buckles that were reminiscent of a tin can junk modelling concoction made by a ten year old. It was a moving miracle on four wheels.
Lady and Dr P had a far better model. They crashed it.
LCM was called back to the scene and asked to translate in her best Spanglian. The police turned up, LCM and Lady P were struck dumb by the officers who were over six feet in height and dazzling in uniform. They both donned multiple sparkly earrings. One was female.
Back on the beach there were torsos, tits and tattoos everywhere. OH and Dr P were transformed into lighthouses, not knowing which way to look with all the totty around. It became a great excuse to ‘watch the children’ under the pretence of doing something useful whilst observing the bountiful generosity on display.
Lady P kept her cool until a threesome in full view packed up to head home. One of the trio appeared to remove the lower half of her bikini as well.
Judge for yourself.
Of course, not being one to pass judgement (*cough*), LCM also kept her cool and did her best to appear nonchalant about all the goings on. Until someone said she had crazy hair.
No. Really?
So the moral of the story is: don’t get your tits out* if your car is dodgy and your hair looks like you have stuck your fingers in electric voltage. 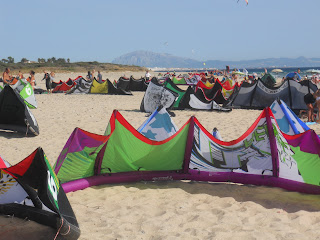