The curious case of Kevin, the trapped squirrel, and the Innits

One thing that Kevin never is, is dull. Never, never, never.

Take the most recent meeting. The Kevinettes - almost a full house - were readily supplied upon arrival by the Doctor of Psychology (whose turn it was to host) with glasses of Pimms and tasty nibbles. Once these were devoured, we moved on to more replenishment of drinks and a delicious meal. There was even cheese and pudding. Michel Roux, eat your heart out.

Fortunately this time we remembered to keep some food aside for the Doctor's husband, who had taken himself to the gym to counter the calorific intake we were busy enjoying. Wise move. If for no other reasons that at least his eardrums were spared the vast amount of laughing and cackling and general telling of stories that was taking place.*

We had been going round the table establishing "What makes a good book?" for each of us.
The LCM stipulation that the replies should be 140 characters or less went slightly by-the-by as a few glasses of wine had been consumed by then, and there is nothing better than a drink (or several) to loosen tongues. But the Kevinettes did well, by all accounts, we will make Tweeters of them yet.
And before you wonder, yes, we have conversations like this at every meeting.

The conversation went something like this, in reply to the question.

Belfast Blonde - "Characters, interesting ones."
Botanical Artist - "Engrossing plot."
Lovely Radiographer - "An author who writes a good story without showing off."
Belfast Blonde - "Have you heard this new term: the Innits? It's the new Chavs."
Aussie Solicitor - "Intellectual stimulation."
Doctor of Psychology - "A confident writer who draws you in."
LCM - "Kevin."
Belfast Blonde - "I had a squirrel in my bird feeder the other day."

At which point we all stop and look at her. Never mind the Innits, it's the squirrel we're interested in. 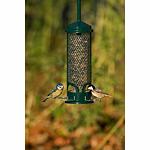 She continues to then tell the story about looking out in to her garden around ten at night, and discerning a squirrel which appears to have gotten stuck inside her (squirrel-proof, supposedly) bird feeder. All except for the rodent's tail is firmly encased in a narrow plastic tube. Said tail is hanging out and appears to be flickering.
In a mild panic she does what any sensible female would do.
She phones a male friend.
To cut a long story short, male friend proves to be as useful as a chocolate teapot, the RSPCA is called, arrives some time around midnight, the bird feeder is cut open and the squirrel - miraculously - revives itself and trots off, unfazed. Like this sort of thing happens every day, right?
The RSPCA woman then proceeds to distribute what is left of the seeds around the garden, calling after the scampering animal, "There you go Mister Squirrel, some more nuts for you if you are hungry later!", hands back the mangled remains of the bird feeder to Belfast Blonde and asks for a donation.

"What did you say?", we all asked Belfast Blonde.
"I was speechless," she replies, trying not to laugh.
"Why?" comes the chorus.
"She looked like a squirrel herself!"

* Of course, we also discussed the books we had read, in quite some depth, but somehow it is the other events that seem to keep us coming back, namely food, drink and anecdotes.