Even managers are capable of taking the mickey

I have been away at the SKO.

What struck me this time - and I have attended numerous events of this nature over the course of my twenty years in the City - was how subdued it was. Now whether this was a reflection of the past turbulent year my new employer has gone through (reorganisation, redundancies, re-inventing of the wheel in some cases), or whether it was the venue (vast hotel conference centre, middle of nowhere, grey, grim and drizzly outside, I managed to get lost half a dozen times without even leaving the premises), or perhaps even the audience (some five hundred plus people from all parts of Europe, with a variety of interpretations of the English language), I really cannot put my finger on it.

It was most peculiar.

After two days of death by powerpoint (in a variety of guises, but still sleep-inducing nonetheless), we had a further two days in break-out groups, supposedly to learn all about how to understand a client's requirements, ask the right questions, cultivate the relationship, and build them a solution that addressed their needs but was a "Fiat not a Rolls Royce".

Right. Basically what I am already putting in to practice in my new role. That old phrase about teaching your grandmother to suck eggs kept springing to mind.

So, the upside was meeting and working (I use the term loosely) with some new (male) colleagues from other offices.  An American, a Swiss, two Germans and me. I named our group Four Blokes and a Bird. I think they got the joke, although at first the Teutons thought I was slightly bonkers. I was to prove them right.

The downside was some five hours spent deciphering an incomprehensible excel spreadsheet with one hundred and twenty lines and twelve variations. Oh, and it had a bug, meaning that if you filled in certain cells and then pressed 'calculate', the result read 'confused'. I kid you not. We were definitely that, regardless of nationalities. When I later mentioned this waste of time to one of the organisers, he nonchalantly said, "Oh, yes, we won't be using it in the next course."

I think I swore at that point.

Anyway. Where was I? That's right, the workshop. The culmination of which was a presentation of our findings in one of the following formats: singing, dancing or acting.

So I mentioned this to the Four Blokes:

And next thing I know... I am the Bird trussed up like this: 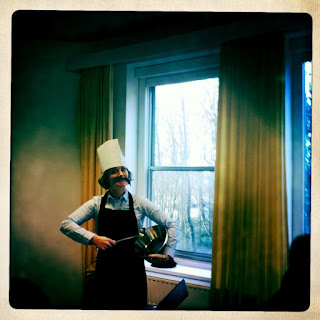 And our presentation was thus:


Morale of the story? Even management should be able to poke fun of themselves and wear silly fake moustaches.

At least the laughter is genuine.