And now for something completely serious 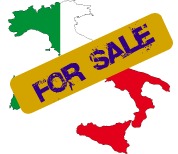 Anyone see this? For those who have been keeping abreast - and commenting - on recent events in Tunisia and Egypt, and now Libya and Bahrain, it may seem an absurd comparison to liken the Arab world's political and economic characteristics with the nation that has given us Leonardo, La Dolce Vita, and Lamborghini. Oh, and pasta, pizza and panini (which, as an aside, actually means sandwiches - plural, so please please please remember this when ordering your lunch at the local café, eg one panino, two panini...).

The article in question (it is the Lex column from the most recent Weekend FT for those of you who cannot follow the link) draws an analogy between the elder statesmen of the Arab world and the prevailing gerontocracy of Italy. Or, more precisely, how Silvio Berlusconi has over a period of some sixteen years reduced Italy - to quote my sibling who lives and works there - to "un paese senza futuro" (trans. "a country with no future").

I will not start proselytising readers one way or the other as to whether the status of the Italian nation is merely down to one individual (it is not, but he has certainly run the country as his own personal fiefdom with no regard or respect for its subjects), or the culmination of other economic factors (inflation, unemployment, public sector debt to name a few), however it did remind me of an event many years ago when I was relatively novice to London.

In short, I was offered the opportunity to work in Italy. There was no formal application process, no job interview, no request for references. The mere fact that I ticked the right boxes (nationality, languages, married, Catholic - albeit seriously lapsed) was sufficient kudos for my prospective employer. Who was it? None other than the Istituto per le Opere di Religione, more commonly known as the Vatican Bank.

I turned them down. You know what it's like: timing not being quite right, about to purchase first abode with OH, newly settling into married life, rowing commitments (highest on list of priorities if I recall correctly), etc etc. Somehow the lure of duty-free food shopping in the Vatican State was not enough to temp me. Or a subsidised apartment in Rome. Or zero income tax. (Actually now that I write this down I query my wisdom).

Guess what? I was told that if I ever changed my mind, the offer stayed open.

Anyway, the point is this: whilst I love Italy dearly and relish every visit, I would not, could not live there again. The bureaucracy that existed some twenty years ago has grown increasingly worse, the living standards are tougher, the job opportunities non-existent, the disillusion amongst the educated, especially the young, palpable. In a nation where nepotism is still king, promotion is given according to length of service (not ability), pay structure is rigidly set by unions, and the ruling elite across the board stays in power until they exit their offices feet first, it is hardly surprising that someone of Berlusconi's calibre has managed to retain power for so long.
His interpretation of 'divide and conquer' is more akin to 'rape, pillage, deny and denounce'.

So, as the FT article states so well, much in common with (I quote) "many of the traits of the classic Arab plutocrat".

I wonder if that covers plastic surgery as well? 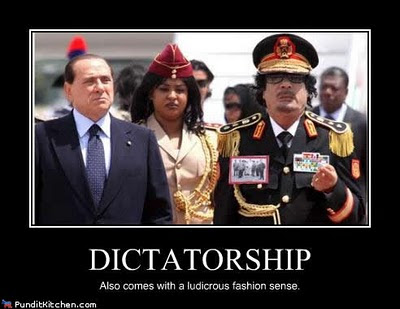 Yes, I know. Completely against the grain. A serious post. Stop sniggering in the back row there, I am a professional businesswoman after all. Normal sarcasm resumes tomorrow.