So this week's theme is men. Interesting. Tara's prompt says to post pictures "... of the men in your life - dads, sons, uncles, teachers, partners, brothers. Let's hear it for the men!"

Which got me thinking. How do they see themselves? Cue a sift through the LCM archives.

Am digging out an oldie here. In fact, I really had to rack my brain about the date. It is a photo from 1994. That's sixteen years to you and me. Zac bloody Goldsmith was still wet behind the ears then. Sorry, digression, more on that here.
As always, I seem to take a totally different tack to most of the other brilliant contributors (and if you have not seen or visited their sites then do so now, some truly fabulous stuff out there).

Here you go, suitably doctored as always to preserve anonimity (not quite sure why I am bothering since the J-Lo film screening event where I was video'd in all my forgot-to-check-in-a-mirror glory). 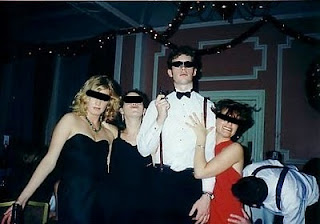 Rowing club ball, 1994 - yes, I already metioned that.
Character is the middle impersonating James Bond with dark glasses and a water pistol is the strapping younger brother of one of my best friends.
Glamour puss Bond girl wannabes (and rowing crew members*) are the aforementioned best friend, another good friend (gloriously blonde) and LCM.
Think the brother believed he was 'living the dream', of sorts.

Oh, and that is Other Half biting my bottom. And yes, we were already married.

* If you have come across female rowers, you will probably know that 'glamour' and 'boat' do not usually sit well in the same phrase. Far less during an outing or a training session, let alone a race. But I have known a member of the women's first eight to ask "does anyone have a nail file?" from somewhere up in the bows. On the starting line. That was her last race.
Typed in haste (as always) by London City (mum) at 15:49