Boys on tour (brains at home)

Sponsored post
This is a first for me. I am actually being sponsored to write something on the blog. Conveniently it has to be around a related topic, but does not have to actively advertise the brand.
How marvelous then that this should dovetail with what I was planning to write about anyway.
Other Half went on a boys' long weekend skiing recently. He of the double t-shirt standard and extra pairs of boxers/socks/swimmers "just in case" (just in case what? there is a mix-up in destination and you end up in Madagascar instead?) managed one mere piece of hand luggage. He even dispensed with taking his own ski boots. Mind you, after traveling with Crappy Air myself, I would also opt to keep all my belongings close and dispense with unnecessary extras.
So, the evening prior to his departure he is going through his documents for the trip.
Itinerary. Check.
Passport. Check.
Boarding pass. Check.
Travel insurance. Check.
"Are we covered for winter sports?" he asks.
"Of course," I answer, thinking what a shame it is not applicable to recent ice skating mishaps.
And off he goes.
Fast forward to the re-entry.
"How was it?" I ask, nonchalantly.
"Oh, good fun," he replies (so talkative these blokes, aren't they?)
Eventually this is what I could surmise:
- they spent most of the time skiing in fog low cloud (sorry, and the difference is...??)
- one member of the party fell down an 'invisible drop' due to the poor visibility and twisted their knee (cue lots of laughing)
- another member of the party fell down a further 'invisible drop' due to poor visibility and bent both of their thumbs backwards (cue even more laughing, especially as said individual's main concern was whether he would still be able to drive later that week at a sports car racing track day out - typical)
- the flight back was delayed meaning they missed the last trains and had to catch taxis home (so much for savings and cheap flights)
But - they had a good time. And he brought me back a present.
A packet of pasta. 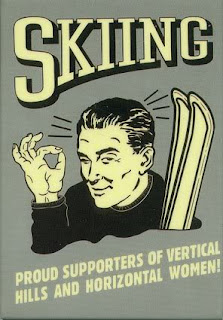 (Am sure this is more what the boys on tour had in mind when they set off.)

Image courtesy of i35.photobucket.com
Typed in haste (as always) by London City (mum) at 20:14