Thanks to the lovely Kate who tagged me for this (and yes, you did it correctly).


I am being suitably diligent and following the instructions:


1. Open the first (oldest) photo folder in your computer library
2. Scroll to the 10th photo
3. Post the photo and the story behind it
4. Tag 5 or more people to continue the thread.
So, here goes. 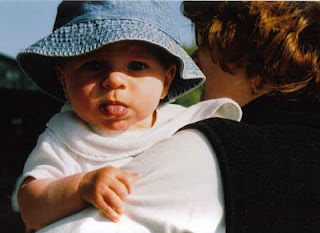 May 2003, France. Rowing camp.
Mr Man, aged 4 months, came along - as I did - almost by default as Other Half asked whether we would like to join the squad at its annual training camp (we met at a London rowing club, for those of you unfamiliar with the facts).
I thought it would be a 'nice break' from the new mum routine and that I might actually get in a paddle or two.
Oh no.
Mr Man was whisked off my hands by my coach, passed around other members of the club who took it in turns to look after him (conveniently passing the baby back to me only when he needed changing), and I ended up training in earnest once more.
Result? One very happy contented baby who gurgled and smiled at everyone and instantly became the club mascot.
And one LCM who was fit enough to race at Women's Henley again in June.
And I now tag:
Humdrum Mum
Very Bored in Catalunya
Yummy Mummy
Bloomin' Marvellous
and Hot Cross Mum
Enjoy!
Typed in haste (as always) by London City (mum) at 09:51