My war wound: 'tis but a scratch

Heartening words from a (male) friend when he asked how I was faring with the broken wrist and I sent him this in reply: 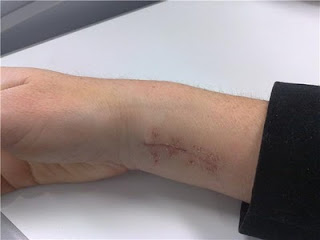 Of course, I could have been far more dramatic about it - a colleague just asked whether I had a photo of the actual break itself pre-cast/re-set/bandage/operation, and I ticked him off for not thinking about it himself as he was with me when it happened, but typical male priorities meant he went to get a drink to fortify himself instead of manning a camera... whilst I took my skates off, put my shoes on AND tied my laces.
So yes, 'tis but a scratch I guess. Albeit a very stiff and slightly immobile one at that.
Am quite a dab hand at putting on makeup with my left hand now though.
Typed in haste (as always) by London City (mum) at 15:36