A flush of memes

I was lying in bed last night wondering what to call this post as I composed it in my head (yes, I know, the things you do to get to sleep...), and it dawned on me that since I have been tagged by both It's a Mummy's Life and Fraught Mummy to do an object meme and a photo and song meme respectively, I might as well make light of the situation and roll all three in to one.

So, a bit like a game of poker. Sort of. Says she who a) has never played the game, b) knows nothing of the rules, and c) has only picked up the terminology from films like Casino Royale and the like (hmmm Daniel Craig, yes, very nice, oops, sorry, distracted again). 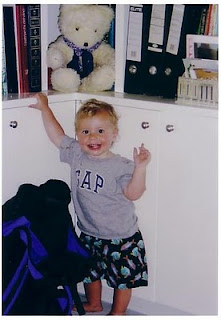 Now re the memes:

I love this photo of Mr Man just aged one. Typical cheeky smile, happy little boy, a joy to have around. This captures it all. Whilst I would typically never put personal photos on this blog, he has matured sufficiently in seven years to be recognisable only to those who know me - and him of course.

Also in this photo is an object. Actually there are several, but one in particular which is very precious. Can you spot it? Yes, the teddy bear. Called Jumbo, it was given to me as a baby and has lasted the distance (and several house moves and continents), and is now residing in the safety of my parents' home, out of the cherubs' reach. Jumbo always had pride of place in my bedroom as a child and never came unstuck, unstitched, or lost a limb or even an eye, something to be said of the quality of bygone days. He affectionately wears one of my father's neckties, possibly to remind him to behave or else!

Re the song, well there is only one that really comes to mind. It has been played across the decades, at parties, on the radio, in my iPod, and never fails to bring a smile to my face and put me in a good mood, regardless of the commuter throng, offspring's tantrums or similar. And of course, as a die-hard devotee of the group, I know all the words, so not singing along is never an option.

What is it? Dancing Queen, of course. Nothing like a good ol' Abba tune to get your feet tapping. For what I can remember, Mr Man would have listened to it at some stage during his first year and I like to think it was playing in the background when this photo was taken.

And of course the other kids love it too.